There is a point along the yield curve where the highest interest rates are achieved that is the point of yield elbow. It represents the best opportunity to realize the highest rate of return on a number of different types of investments.

For this very reasons investors look towards this yield elbow and order their sales and purchases accordingly. It is also known as the term structure of interest rates.

The yield curve is a graph that plots the yields of similar-quality bonds against their maturities, ranging from shortest to longest. Note that the chart does not plot coupon rates against a range of maturities that’s called a spot curve.

1. If short-term yields are lower than long-term yields, the curve is called a positive (or “normal”) yield curve.

2. If short-term yields are higher than long-term yields, the curve is called a negative (or “inverted”) yield curve.

3. A flat yield curve exists when there is little or no difference between short- and long-term yields.

The elbow is the highest point on the curve. 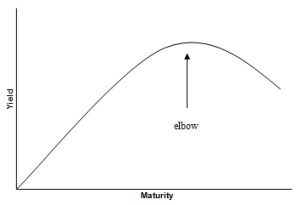