It is an amount of money given directly to firms by the government to encourage production and consumption. A unit subsidy is a specific sum per unit produced which is given to the producer. There are many forms of subsidies given out by the government, including welfare payments, housing loans, student loans, and farm subsidies.

The effect of a specific per unit subsidy is to shift the supply curve vertically downwards by the amount of the subsidy. In this case, the new supply curve will be parallel to the original. Depending on elasticity of demand, the effect is to reduce price and increase output. 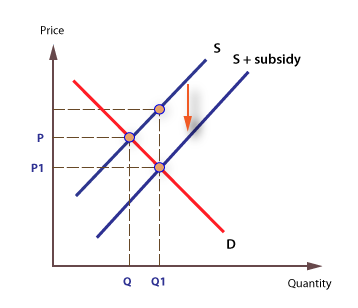